Crafting an effective film proposal is essential to getting your film approved by studios & producers. Potential investors require it to get a creative overview of your film project & understand its financial viability. That is why a well-written film proposal works wonders in getting people on board with your project.

Let’s look at how to deal with each of these & learn how to write a film proposal:

1) Write an engaging logline
The logline is the star of your film proposal. It describes your entire script in a line. So keep it short. It should take a maximum of 30 seconds long to read aloud. And remember to keep it engaging, since a good logline is a driving force in the sales pitch for investors and producers.

Here are a few examples of some well-written loglines of celebrated movies.
“A seventeen-year-old aristocrat falls in love with a kind but poor artist aboard the luxurious, ill-fated R.M.S. Titanic.” – Titanic

“There are 3.7 trillion fish in the ocean. They are looking for one.” – Finding Nemo
“Three unemployed men find the answer to all their money problems when they receive a call from a kidnapper, and mayhem ensues.” – Hera Pheri

2) Follow it with a synopsis
This part of the film proposal summarizes your story. Start with your script’s title, your name, and your contact information. If your screenplay follows the traditional three-act structure, describe each act in a paragraph.

Remember to keep the synopsis entertaining. This will help you build and multiply the investor’s interest in your movie.

Note: Bear in mind to write the synopsis in the active voice. Make less use of passive words such as ‘should’, ‘will’, ‘might’, and so on. Passive words affect the intensity of a story and mess up the emotive sense of the proposal.

3) Add a sample storyboard
Illustrate a couple of unique scenes of your film in a storyboard format. Storyboards aren’t necessarily included in the film proposal template, however, their presence allows the readers to visualize the story more vividly.

For example, a stunt scene in the classic James Bond’s movie ‘Tomorrow Never Dies’ was illustrated in this way: 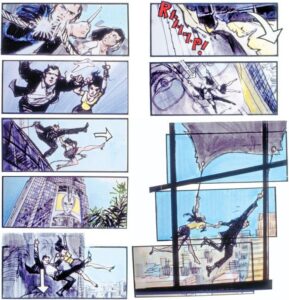 Here’s how the scene turned out in the film:

4) Flesh-out the character descriptions
Paint a picture of them in two or three sentences, to enhance the impact of your story within the minds of the potential financial backers. Throw light upon the protagonist, antagonist, and other chief characters by describing their attributes, motivation, and goals.
This will help breathe life into the actions and dialogues of your characters.

Note: Character descriptions should always be in the present tense.

5) Mention your casting wish-list & collaborators
This section of the film proposal indicates the people that may work on this film. Here, you can give a background of DOPs, editors, writers, existing producers that are already onboard your project.
Also, mention the actors you wish to have on board. Select your preferences according to your character’s traits. The actor’s physical & emotive attributes should fit the character well.

6) Mention your budget plans and resource needs
Outline the precise needs and resources that will be required to commence production. Include the producer’s fee and costs for hiring crews, casting actors, planning the shooting schedule, booking hotels, meals, and travel, etc.

If you’re approaching a small producer or studio, don’t request a very luxurious budget. This might trigger the chances of rejection of your film proposal.

7) Proofread
Lastly, ensure that your film proposal is well-written and all set to be presented to potential investors and financial backers. Make certain that there are no spelling mistakes, grammar errors, or editing mishaps in your proposal.

Heaps of film proposals hit the desks of production companies every week. So make sure yours is perfect. The key is to sell your story as quickly as possible while turning your ideas into a workable project.